Weihnachten or Christmas wouldn’t be Christmas without a Bunter Teller! Every year, households around Germany are filled with these plates that feature delicious sweets for the entire family.

Bunter Teller quite literally means ‘colorful plate,’ but this tradition is so much more than  that. These treat-filled plates belong to Christmas like Santa comes down the chimney here in the US. It is a plate on which all sorts of sweets like chocolate-covered nuts, wrappers of all colors, Pfeffernüsse, Domino Steine, Spekulatius, Eiskonfekt, and a bright foil chocolate Santa Claus sit next to gingerbread and marzipan potatoes. I remember when I was a child, there was always a plate under the tree along with all of our presents. A special cardboard paper plate with a beautiful Christmas  design filled to the brim with all of our favorites, some that we would only get during the Christmas time. My plate always had nougat chocolate on it (my favorite) and my brother’s always had Schokoladenkränze, chocolate circles that are made to resemble Christmas wreaths (his favorite). 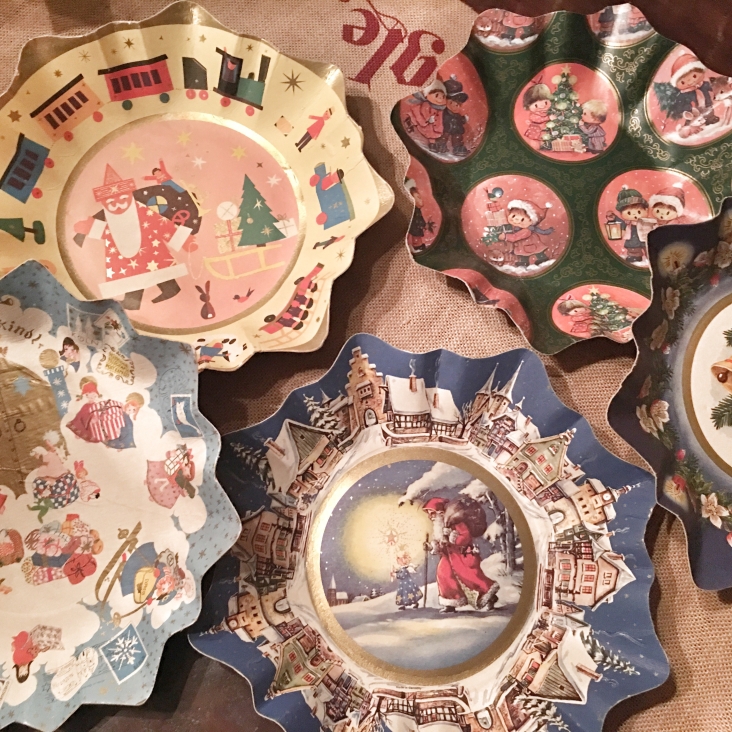 These plates were ours to eat and believe me we made sure to keep them to ourselves. For weeks after Christmas, they would still linger in our bedrooms on our desks, ready to just grab a taste here and there. But we also had a big Bunter Teller on the coffee table in the living room loaded with cookies, candies and even our favorites along with my parents favorite sweets. That plate usually appeared as soon as December started and was a plate for everyone to share. Usually we would snack on things when we would watch movies during the Advent time. And funny enough that plate would always magically refilled itself with all those colorful wrappers and chocolate goodies…(hint: my mom spend the entire holiday season replenishing it). It truly was and still is a feast for all the senses. 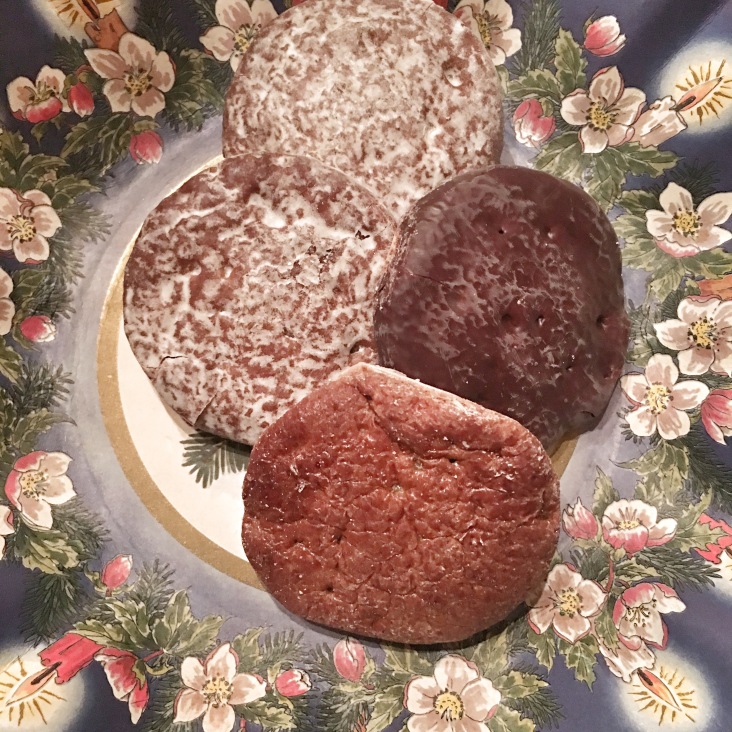 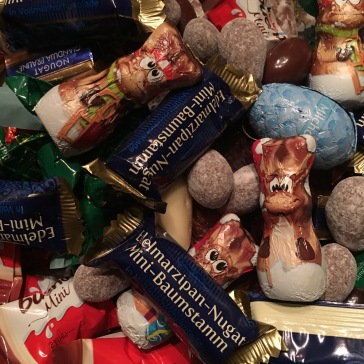 An old children’s song called “Lasst uns Froh und Munter sein und uns Recht von Herzen Freu’n” (Let us be happy and cheerful and rejoice with all our hearts) first mentions the Bunter Teller in the mid 19th century. Before that there is not really anything that documents this Christmas tradition. According to the song, which is dedicated to St. Nicholas, on the eve of Saint Nicholas’ Day which is December 5th, children put out their cleaned shoes and plates by the front door in hopes that St. Nicholas would leave a treat. “Dann stell’ ich den Teller raus – Niklas legt gewiss was drauf” (Then I’ll put a plate out – Nicholas will certainly put something on it).

Historians believe that the custom of the Bunter Teller originated with the Christmas tree. Originally, Christmas trees were decorated with nuts, apples, and Lebkuchen (gingerbread). Kids would eat the treats of the tree. But soon glass balls, wooden ornaments and Lamenta or tinsel took over the Christmas trees. However, even though the treats were exchanged for re-useable decorations, according to historians, they wound up in children’s shoes and on a Christmas plate.

But not only the treats are special on the plate, the plate itself with its special ruffle edge is also a piece of art that usually gets handed down from generation to generation (the plates come with a special coating making it easy to just wipe down). The first paper plates were invented by a retired museum director in the Brandenburg town of Luckenwalde about 150 years ago. After reading how unhygienic it was to eat food off old newspapers, he began to experiment with pulp made from sawdust and soon paper plates were born. In the 1880s, the colorfully illustrated paper plates began to appear over all Germany. 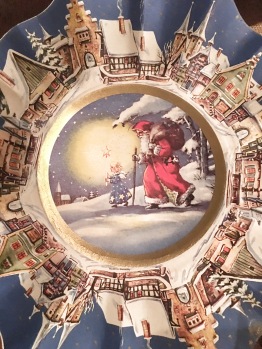 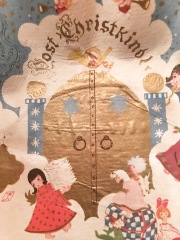 The heyday of the Christmas paper plate is said to be around the 1920s to the 1960s with no shortage on images.

Today a German Christmas is not complete without a Bunter Teller on the table. And it is so easy to make your own! Just grab a plate and load it up with cookies, chocolate, nuts, and fruit. Last year, I made a plate for all of our neighbors as a Christmas gift and filled it with Milka chocolate and other goodies. It was a huge hit! 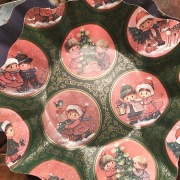 Traditional German Christmas paper plates can be found on ebay. But for those who are looking for a washable version Villeroy and Boch make a porcelain version of these popular plates.

4 thoughts on “Bunter Teller – A German Christmas Plate Of Goodies For Everyone!”